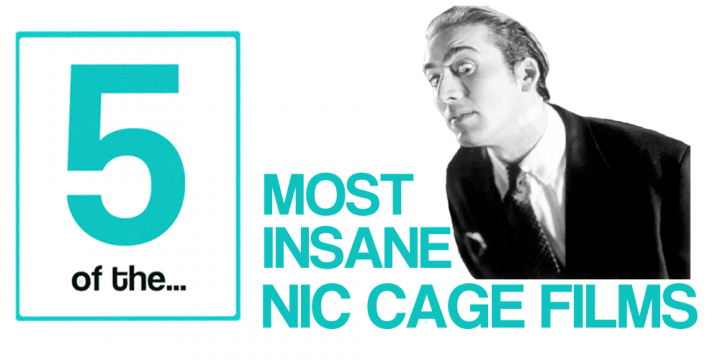 Of late, Nicolas Cage has taken over the online world. As his likeness adorns countless internet memes, some people enjoy Photoshopping Nic’s face onto cats, whilst others proclaim he is their One True God. The actor’s popularity and his links to online absurdity can be exhibited with a quick search of his name into Google Images.

Weirdly enough, this seems normal now. However, despite his popularity, it is easy to forget that Nicolas Cage is an actor and not just a face to stick on top of photos of sharks and cupcakes (although I believe this is partially Nic’s own fault for starring in a film in which his face can be taken off and put onto other things). The absurdity surrounding the actor on the internet can easily be linked to his appearance in many ridiculous films. So, if the internet doesn’t fulfil your silly Nic Cage needs (in which case you probably need help), or if you simply want to remember the talented actor before his image was shamelessly and cruelly used to spread ridiculousness online, here is a list of the top five most insane Nicolas Cage films.

If you’re new to the Nicolas Cage insane acting fanclub, this video should bring you up to speed.

Cage plays villain John Travolta Castor Troy in this face-swapping extravaganza. In Face/Off, the stupidly named Castor Troy is a terrorist who is wanted by FBI agent Sean Archer (John Travolta) as Archer suspects Troy of murdering his beloved son. As it transpires that Troy has planted a bomb, the location of which is only known to Troy’s brother ­– the equally stupidly named Pollux Troy – Archer’s only way of saving the day is to actually become his enemy. Oh, they can do that in this movie? Well that’s a stroke of luck. Whilst Archer is running around with Troy’s face, when Troy wakes up in hospital to discover he has no face he decides to borrow Archer’s face as compensation. Despite only swapping faces, the voices and the vastly different bodies of Cage and Travolta also seem to have swapped. I am unsure why the filmmakers believe that the ability to full body-swap is more far-fetched than the idea of transposing one’s face seamlessly onto another person. Perhaps this is solely done for the purpose of making the title Face/Off work on the literal level as well as the metaphorical. Cage effectively plays two characters, however he is much more fun as the villain and is comparatively dull when inhabited by the good cop persona of John Travolta. Face/Off is an average action movie with a silly premise, however it is worth watching for some classic ridiculous Cage moments.

Remakes are rarely a good idea. The original The Wicker Man is a terrifying piece of cinema, a beautifully crafted and unique horror which often ranks as one of the best British films of all time. The feel of the original film, the isolation, desperation, and genuine horror is lost in the remake, party through the change of setting from a Scottish isle to America, and mainly through the replacement of the naive and righteous Christian policeman (wonderfully portrayed by Edward Woodward) with Nicolas Cage being an a self-pitying, moody arsehole riding a motorcycle. However, the fact that this film is so, so bad makes it somehow less offensive as a remake. The Wicker Man contains many of Cage’s most famous ridiculous scenes such as the punch-woman-while-dressed-as-bear and the ‘Not the bees!’ sequence to name but a few. These hilarious moments however do not make the film watchable, and the rest of the film remains dull and painful to watch. I recommend that no-one see this movie, particularly those of you who are fans of the 1973 version of The Wicker Man, as the plot changes are nonsensical and verging on blasphemous to the original. Plus, you can find all of the hilarious scenes on YouTube. That is an activity I can recommend.

SUMMARY: Cage shouts and punches his way through this offensive ‘remake’ to create some of modern cinema’s most insane and unintentionally hilarious scenes.

Written and directed by the masters of cinematic weirdness (Charlie Kauffman and Spike Jonez), Adaptation uses Cage to add insanity to the already surreal story. Cage plays the film’s actual writer, Charlie Kauffman, and his fictional twin Donald in a plot that details the struggle of turning the book ‘The Orchid Thief’ into a film. Charlie, the accomplished screenwriter, aims to create a faithful adaptation of the book, whilst his brother Donald, the aspiring writer, favours action and scandal and questions the ability to make a film which is just about the search for a flower. The conflict between the brothers’ personalities is uniquely reflected in the film’s narrative structure and plotline, whilst Cage actually has a chance to prove that he does have some acting range. Self-referential and subversive, Adaptation is a lesson in post-modernism, mixing fact with fiction to create a wonderfully weird story. The fact that the plot changes immensely midway through the film, and then descends into chaos and absurdity until the climax, exhibits a boldness for which Kauffman (the real one) should be commended. Original, clever and complicated, Adaptation is a fun film with a good story and a great cast including Meryl Streep and Chris Cooper who won an Academy Award for his role in the film.

SUMMARY: The film gets extra points for doubling the amount of Cage screen time by casting him as twins. And it has crocodiles in it.

The only film on the list which does not feature Cage as the lead, Deadfall is a truly awful film. I admit that I didn’t make it to the end of this film, partly due to the fact that Cage only has a small role as Eddie, a con man who meets his demise fairly early in the film. The film’s plot is completely insane yet extremely boring, and Cage manages to pack plenty of his own brand of ridiculousness into the film considering his relatively brief screen time. Cage’s performance in Deadfall is almost legendary, the character of Eddie is constantly angry, and Cage plays him with a ridiculous accent which has so little clarity that not a single word can be understood. This silly accent is teamed with an even sillier wig to create a character too insane to be at all believable. That said, believability was probably not the film’s key motive; a fact that became apparent with the introduction of a villain with a mechanical lobster claw for a hand. Although Cage takes overacting to a whole new level, his performance in this film is entertaining and memorable, which sadly cannot be said for the other actors in this tedious movie. At some point later on in the film Charlie Sheen randomly turns up as a talented pool player, for reasons that I am not entirely sure of. Ridiculous from start to finish, the film is only as (mildly) entertaining for as long as Cage is on screen.

SUMMARY: One of the worst if not the worst film of Cage’s career. Really not worth watching, just go to YouTube.

Completely absurd 80s film in which Cage plays Peter Loew, a fairly successful man who, after spending the night with a night with a stranger, gradually becomes convinced he is a vampire. Whether intentional or not, Vampire’s Kiss is one of the funniest films I have ever seen. The plot of the film is insane, but it is without a doubt Cage’s manic performance which makes this film so wonderfully ridiculous. Loew’s descent into madness is entertaining and the film is always funny and occasionally creepy, particularly the scenes which Cage shares with Maria Conchita Alonso who plays one of his employees. If intended as a black comedy, this film really hits the mark and deserves a far higher rating than it currently holds. Cage’s performance and the character of Loew are so over-the-top that many of the film’s scenes are genuinely hilarious; my particular favourites being the scene of Loew crying in the most dramatic and unnatural way I have ever seen, and the chaotic Cage running around for five minutes repeatedly shouting ‘I’m a vampire. I’m a vampire.’ Very enjoyable, hugely funny and completely insane, this is yet another Nic Cage film which has become infamous thanks to internet memes and YouTube clips.

SUMMARY: If you’re reading this article, you’re going to want to see this film. If you’re a fan of Cage, vampires or reciting the alphabet, this is a film for you.