I played so much Crash Bash as a kid. When I tried to play it again recently, my *cough* emulated *cough* version was broken so that you couldn’t see the words in the menu. There was just a blank space where the words should be. But that didn’t matter, because I’d played the game so much when I was little that I actually remembered where all the words were supposed to be. So I listened to the beeps to know when I was changing to a different word in the menu, moving down, pressing X, knowing the default option was no, move left to yes. Knowledge I hadn’t needed in a decade. Still fresh. 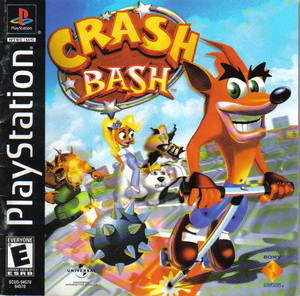 I look back on Crash Bash as the game I shared the most. Anyone I met, I made them play this with me. Some were good and we made progress, others just fell asleep mid game. Despite the mixed reactions from my childhood friends, I really liked this game. So, I wanted to find out if it was just as fun as I thought it was when I was little.

After loading Crash Bash again recently, the graphics didn’t shock me. I look back at some old games and wonder how anybody, at any point in history, ever found them enjoyable. Like pretty much anything you’d see on the Atari. To me, these games just don’t look fun because of how primitive they are. But I know that people that enjoyed those games at the time won’t notice, they’ll just be transported back to their youth. Crash is the same with me. Maybe millennials wouldn’t derive much enjoyment from it. Maybe they think it’s too old. Maybe they have so much liberty, they’d just buy gaming accounts, from websites like www.aussyelo.com, and start enjoying games on their high-level accounts.

The sound in Crash is what transports you back the quickest. The funky upbeat tones put me straight back to 2001, in my bedroom with my PS1. You can’t deny they’d sound out of place in a modern game, but they still fit the vibe perfectly. It makes you happy, it immerses you, and lets you forget about the world.

When I played this game by myself as a child, I remember getting really sad when the characters died. They’d fall down, and lie lifeless on the ground as their soul left their body to go to heaven, looking all sad as it floated up into the sky. I hated being reminded of the permanence of death as a child. That hasn’t changed now. There’s just no need to remind me of that. If Crash just stopped moving and the game restarted, it’d be fine. I wouldn’t think about it any further. But their souls actually leave their body.

In playing Crash Bash again I was reminded of my innocence as a child. At the start of the game you’re given two random enemies who you then play against in every minigame thereafter. I never realised the significance of this when I was little. I just played happily against them. But now, rivalries are formed, vendettas taken out, and I have grown to hate every enemy. Tiny roaring as he puts a ball either side of my car or, Nitros Brio laughing after he zaps me with his stupid gun. Hate ‘em all.

When I was young I used to love the ball/goal levels. You’d control a little cart and move on a 2D plane trying to stop balls going into your goal and get them in others. Now I can’t wait for those games to finish. The longer they drag on, the closer to existential crisis I get. I just don’t get how I lived for those levels. Now, they’re just frustrating.

The less said about the level where you ride a polar bear the better. I can’t bear to think about the amount of times I’ve just propelled myself right off the edge after lining up a big hit on tiny. It’s a level where the Sound of Silence may as well be permanently playing. 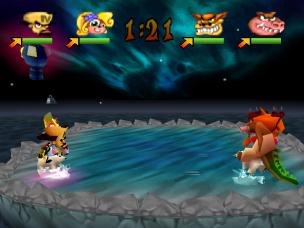 There isn’t much to say about the level where you throw boxes at each other. It’s fun but a little empty. I used to like the level where the floor disappears when you threw TNT’s. I’d try to troll the AI by remove as many blocks as possible, only to accidentally kill myself by falling down the giant floor holes that I’d just made.

The pogo levels were never that interesting to me. When I was younger, I used to try and get as many squares painted as possible before I checked out with a box or completed the square. I remember once I lived the dream, circling the whole board, turning it all yellow and getting the full 64 points. No one ever believes me though. Playing it now, I tend just to play it safe. Get a few points and check out, steadily increasing. I’m boring now. It can be pretty frustrating when you get shot, or Tiny takes your box right at the end and you can’t check out. You never really get rid of those frustrations, you never feel like you can get revenge. Sure, you can shoot them, or take their boxes, but it just feels empty. It’s a 16 year old bit of code that you’re fighting.

I used to hate the tank game. I remember distinctly that it always ended up you and an enemy tank, spamming the fire button. If I was going down, I was taking him with me. Or more often I was getting him to his last sliver of health before he finished me off and 2 v 1’d my friend. Playing it now, I really enjoy the tactics of these games. It was much more in depth than I thought. Bombs drop, health pick ups, taking cover. I was so stupid just to lock horns.

I mainly played the game with friends for one night, so I never got to see much of the later levels. Playing it again with more time and more intelligence I finally got to appreciate these levels. Appreciate them for the insanely hard, frustrating RNG fest they are. Okay, the wee car one where you go round in circles is alright, once you get used to it, not much to say. But the one where you collect balloons feels almost impossible. Tiny is always hooving up the balloons, kicking you as soon as you get a power up. We played for hours and barely won.

I used to find the bosses very immersive. I thought they were a good end to the levels, something grandiose and imposing. But looking at it now, they’re not really. They’re one dimensional levels with a narrow win condition that you just have to do a few times with very little changing tactics in between. Especially Papu Papu and the Bearminator.

I didn’t care much for the gems and crystals when I was little. I kind of resented being walled off from the rest of the story because I didn’t have enough purple gems. I mean, I’d done the requisite levels, why can’t I just go to the next floor? But now I appreciate the different win conditions and handicaps. It adds a challenge to the easier floors and allows you to revisit the game and it still feels fresh.

In conclusion, the games I thought were fun aren’t that fun. The games I hated as a child turned out to be alright, and the balloon one is still stupid. So I guess it all levels out.