Children tend to be easily pleased when it comes to films. If the film is aimed at them and the characters are available to purchase in doll form for a hefty price tag, the chances are they’ll like it. But what happens when you re-watch your childhood favourites through the perspective of your cynical and miserable adult self? 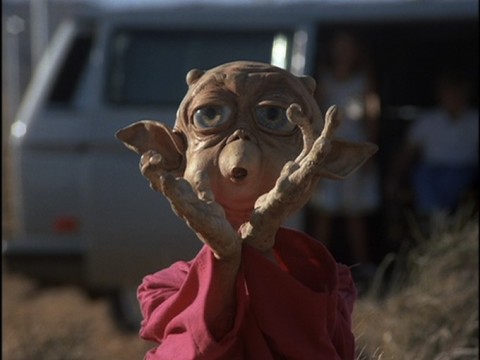 As a child I had a quite a hatred of Disney films which has accompanied me into adulthood. This meant I was forced to look beyond the world of cartoon princesses and singing lions to keep me entertained throughout my childhood. My parents were therefore given the task of finding alternative age-appropriate films, one of which was a little film called Mac and Me. For those of you unfamiliar with the title, you lucky people, it is a film depicting the story of an alien who befriends a young disabled boy. Cashing in on the E.T. trend six years too late, the film was a financial disaster and most people are blissfully unaware of its existence. “Perfect”, they must have thought, “she’ll love that!” 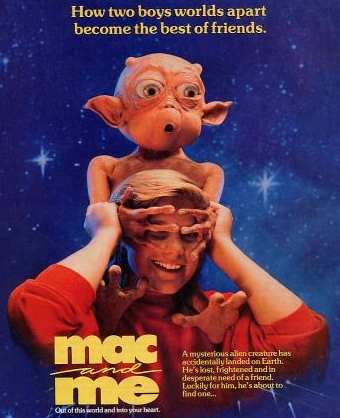 My childhood memories of Mac and Me are hazy, but I am reassured by my parents that I loved it dearly. So, when by some miracle the film was released on DVD and found its way underneath my Christmas tree last year, I relished the opportunity to re-watch the film and to finally understand why my child-self had blocked out all memory of this visual apocalypse which parades itself as a children’s film.

As I briefly mentioned, Mac and Me follows the same basic plot as E.T. only with more product placement. On some strange planet, Mac and his hideously frightening alien family are transported to Earth by the world’s least advanced space machine which literally sucks them up with its vacuum cleaner hose attachment. Once on earth, Mac (which totally stands for Mysterious Alien Creature and has nothing whatsoever to do with the fact that McDonald’s financed the film) is separated from his family and hides out in the house of wheelchair bound Eric (Jade Calegory) and his family. After saving Eric’s life when his wheelchair speeds off some sort of suburban cliff inappropriately located in the middle of the neighbourhood, Mac causes all kinds of trouble, decorating the house with plants and stealing people’s Coca-Cola. At this point it is worth mentioning that these extra-terrestrial beings appear to survive solely on Coca-Cola and Skittles. Although completely illogical in every sense of the word, the filmmakers’ main concern seems not to be for the plot but for the amount of product placement they can cram into this movie. Subtlety is not the film’s strong point and the product placement becomes so bad that McDonald’s actually becomes a part of the plot; there is a long song and dance sequence filmed at a McDonald’s restaurant at which point Ronald McDonald himself makes a cameo appearance. The filmmakers could quite easily convince the public that it was all just an elaborate McDonald’s advert rather than an alien and hamburger filled cinema nightmare.

Although insane, sometimes hilarious and genuinely terrible, Mac and Me is not one of those so-bad-it’s-good films. Most of the film revolves around this small alien creature hiding from Eric’s mother and evading the clutches of some bumbling, inept NASA agents. This becomes dull very quickly and, despite the fairly short running time, the film does feel like it lasts for all eternity. Even though the NASA are portrayed as ‘the bad guys’, I struggle to believe even children aren’t rooting for them and shouting “Just find him already!” at the screen in hope that the torture will soon end. I also doubt that children will be too interested in the lame, boring and unresolved love story between Eric’s brother Michael (Jonathan Ward) and the neighbour who, wait for it, works for McDonald’s. The film does become slightly more entertaining when Eric and Michael take Mac to the aforementioned McDonald’s birthday party, skinning a teddy bear in order to provide Mac with a disguise. Unconvincing and absolutely terrifying, the idiots at the party are convinced that the alien-bear is just a technologically advanced toy, even when unable to resist the catchy tunes at the party, Mac begins to breakdance. Now, I would not recommend this film to anyone of sound mind, however, this scene definitely is worth watching.

Accomplishing the seemingly impossible, from this point on the film gets worse. We are subjected to scenes of Mac, like some sort of alien Pied Piper, driving a child’s jeep around the suburb whilst followed by all the dogs in the neighbourhood. The dire special effects don’t even seem worth mentioning considering how bad the rest of the film is. Things take a dramatic turn for the worst toward the climax of the film as it looks as though Mac’s alien family may die. However, just in time to save them, Eric and Michael revive the dying aliens with some much needed Coca-Cola.  Alive and reunited, the extra-terrestrial family wander into a supermarket and cause havoc with watermelons and, unsurprisingly, cans of Coca-Cola. 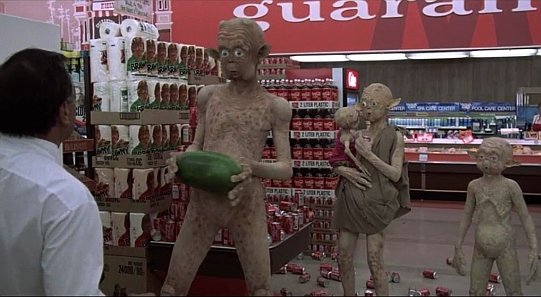 The film ends with a bang as a shootout ensues in the supermarket after Daddy Alien gets hold of a gun. Although I’m not under the illusion (and would certainly not recommend) that you will go away and watch this, I won’t spoil the ending for you.

The Benefit of Hindsight: A truly, truly awful film. I am depressed that I wasted any of my childhood on this atrocity.