Recently the best way to fill out your Steam library has been through bundles from websites like Humble Bundle, Indie Royale and Bundle Stars . I picked up some of my most played games through bundles; The Binding of Isaac, FTL: Faster Than Light and even FEZ could have been picked up through bundles for as much or as little as you want to pay.  And what’s better? You can choose how big of a percentage goes to charity.

Sometimes, however, we pick up some games we’ve never heard of, the baby of the bundle. Some are boring, like Yumsters, some are completely weird like 100% Orange juice, and some turn out to be diamonds in the rough!

I found Apple Jack in an Indie Royal Bundle alongside games such as Stellar Impact and Thunder Wolves, so it was a bit out of place. People who were interested in the bundle were there for games like that, not for this traditional platformer where you play as a man with an apple for a head and you can turn into an apple by crouching.

But Apple Jack has been a blast to play, especially if you’re a fan of the old school platformer and some good old fashioned British surrealist humour. The plot is simple 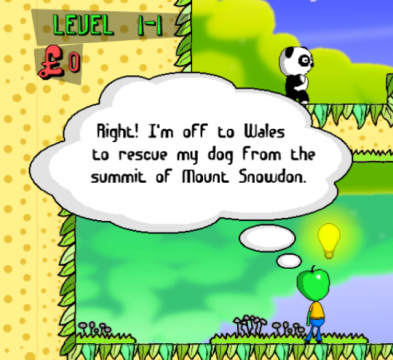 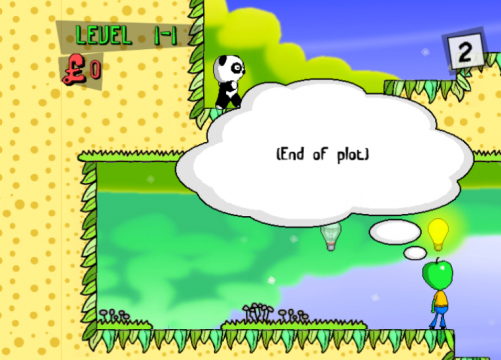 Your journey begins here, and you use traditional platformer elements to pick up what’s in your way and throw them together in order to kill enemies. There is a little bit of hand-holding to get you through the first few levels, but after that, you’re on your own and it gets pretty tough pretty quickly. There are a lot of new mechanics constantly thrown at you, my only worry is that there is too many and the first ones you are introduced to aren’t built upon properly. I always wanted to keep going though, I might ‘rage’ a bit if the level got to me, but I didn’t want to stop. That was partly due to the freedom the game gives you, as there isn’t a traditional beginning and end in the style of something like Mario; levels ends when you’ve completed what you have to do and usually there are a multitude of different ways to complete the level.

Look at the cute panda!

Apple Jack is fun to play and even more fun to look at. There are some adorable sprite drawings in the game from adorable pandas and astronauts to savage washing machines, however, the backgrounds are somewhat underwhelming in comparison. The overall feel of the game is whacky and fantastic; it really is a diamond in the rough and I can’t wait to continue my progression through the panda ridden British countryside!

Both Apple Jack 1 & 2 are available together on Desura for £3.99 (Store Page), and you can find it on Steam Green light now if you want to help it out! Also, you can check out the dev’s blog here and give them a follow on twitter @MyOwlSoftware.