Recently, the best way to fill out your Steam library has been through bundles from websites like Humble Bundle, Indie Royale and Bundle Stars . I picked up some of my most played games through bundles; The Binding of Isaac, FTL: Faster Than Light and even FEZ could have been picked up through bundles for as much or as little as you want to pay.  And what’s better? You can choose how big of a percentage goes to charity.

Sometimes, however, we pick up some games we’ve never heard of, the baby of the bundle. Some are boring, like Yumsters, some sound completely weird like 100% Orange juice, and some turn out to be diamonds in the rough!

The baby of this week’s Indie Royale bundle was undoubtedly Flipper, a ”minimalist puzzle game” that really should not belong anywhere near PC gaming. Its market is for smartphones and tablets, a fact the developers already know from their description of “taps” as opposed to “clicks” when instructing players. So let’s ignore the mind numbing tedium of playing it on a PC in your spare time and let’s assume we’re playing it in the context that the developers imagined; you’re messing around on a tablet and it’s your lunch break. 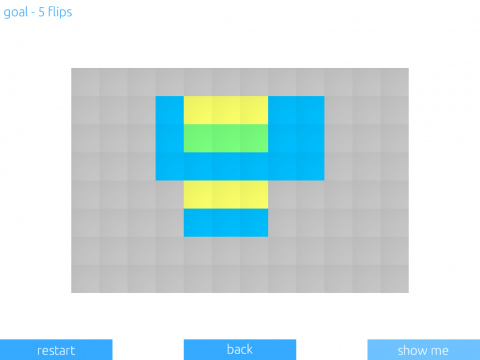 You will get the idea of Flipper straight away. The aim is to recreate a shape that is displayed on the screen by flipping over some tiles. One flip turns the a 3×3 area of tiles blue, if you double flip they become yellow, and, as the levels progress, more colours are introduced which allows for ‘harder’ puzzles but “mind-boggling“ (as Just a Pixel describe it) it is not. You can breeze through the first 3 sections without really having to stop to think, and if you have nothing else to do you might find it passes the time and you may find yourself getting into it. The main problem with Flipper is the complexity, or rather the lack of it. The game remains so simple for such a long time that it provides no motivation to continue and offers no sense of progression. I barely want to keep playing it to see if I can manage the harder levels. Furthermore, there are only a few levels per stage so they can’t really ramp up the difficulty with enough incremental steps before they have to add another colour to the puzzle.

The game does have a second mode, which, with a bit of tweaking, could become a very fun way to pass time. This is an against the clock mode where you have to click designated areas before the time runs out and this can be fun, even on a PC. It would work better as an endless mode with a leaderboard to give it an air of competition; competition makes even some of the most boring games fun for some people.

I’ve seen this game described as art. Direct your eyes below. This is now what passes for art. 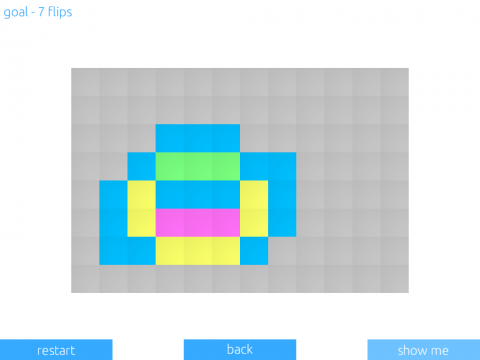 Flipper is an okay puzzle game, with a high level of finish, if played on a tablet, but you’ll get very little enjoyment out of it on PC. If you are on a computer you’ll find something much, much more fun to play and you’re sure to find free flash games better than this.