The Co-Op Chronicles are our venture to find the best Co-Op games on steam. Your guides through the land of Co-Op games are two insufferable and ill-informed guys from England.

I am Andrew. I’m a cynic, I hate everyone and therefore I feel that I’m the perfect person to investigate the world of Co-Op games. ­­

And I’m Joe. I’m an immoral wastrel whose main purpose in life is dodging responsibly and consuming sandwiches, I’m Andrew’s reason for hating the world.

Co-Op games need different elements to single player campaigns; the story must accommodate two people and not just tag someone else in the game. And you don’t want to spend ten minutes watching cut scenes when all you want to do is get playing; especially as cut scenes mean you can’t talk to each other.

They must let you play the game since you don’t really want to sit around watching long cut scenes, but most importantly, a Co-Op game should allow you to just load the game up and start having fun. The last thing you want to be doing is awkwardly figuring out how to play an overly complex game when you’re meant to be having fun with your buddy. 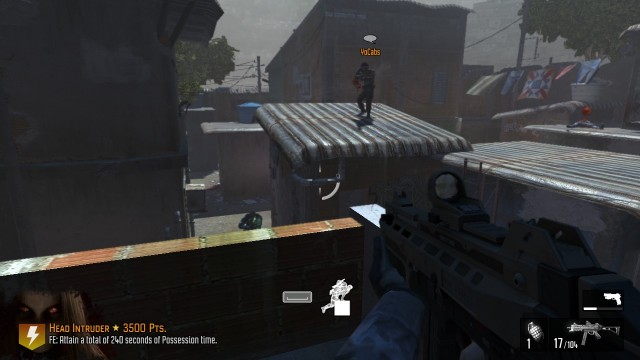 I made the decision to pick up F.E.A.R. 3. It boasted itself as a psychological horror game, and that sounded cool enough. Without any research or history of the previous F.E.A.R. games, I Ioaded it up and sent an invite to my beloved partner Joe.

Receiving the steam invite and joining the party was very easy, which is very important for playing with friends; you don’t want to get bogged down in trying to work out the interface. This makes the game very accessible and you can get playing straight away.

After m’colleague had his usual issues with talking into a microphone, we got going without knowing what to expect. We were instantly greeted with a lot of cinematic cut scene. Yeah, they were nice and all, and told the story well, but we just wanted to play. We ended up just dicking about waiting for the game to start.

Eventually it started and I was Paxton Fettel, I was the ‘cool’ guy? Really? I’m not even the host? Weird, usually when you play Co-Op games the host gets the main protagonist but in F.E.A.R. 3 that does not seem to be the case. So I did what most people do when given control of super-psychic killing machine… abuse the power and start murdering and possessing everything in sight.

So, I’m Point Man? I mean, that’s okay, I can slow time and stuff but at the end of the day I’m just the generic guy with a gun? Joe’s off possessing everyone and I’m stuck here with a pistol. The Co-Op campaign just feels like a single player game with me tagged on shooting stuff. That’s never good. You want to feel like you have a part and I’m not sure I do.

The first few areas of the campaign were nothing too special; we had a jail level and a sewer level, so that’s pretty basic. Yes, they looked okay, but that’s not what I’d expect from a psychological horror. Hell, all it would have taken would be a few more creepy things. It’s an abandoned jail; all you need are some creepy voices, a few clowns and you’re set.

Why does it have to be this way?

But let’s get down to the actual playing. F.E.A.R 3 has that reckless abandon feel that games can give you. I got to just shoot stuff at will and really lay down some damage. The guns felt like they had a lot of weight behind them and felt really good to shoot. How was doing all the cool things, Joe?

The powers of Paxton Fettel were great fun to mess around with, and I had powers ranging from possessing people to making them hover above the ground to simply zipping round the map. It came together and made me smile as I thought of new ways to test these cool powers. For example, warping into a guy in a room with three enemies and making him throw his grenades at his feet made me giggle much like Andrew does when he proof-reads my work.

Did you have fun though? I did at times, when I got into a proper shoot-outs with exploding barrels and shots from every angle. That’s always fun when you’re playing with a friend. It was one of the only times the game allowed for some actual co-operation. I could ask for covering fire, well covering mind control? Joe could ask me to help him with, well nothing really, Mr. Fettel had it all covered while I got shot. Did you have fun?

I did have a lot of fun during the game but that was helped by the fact that when you put two like minded people in an environment and tell them to mess around, it’s obviously going to be fun. However, there were a fair few instances whereby we would be laughing more at the game’s expense. In one scene, one player approaches a door and this starts a cut scene whereby whoever was going through is hit by a gun, wait scratch that no matter whom goes through the door, both players are hit by the same butt of the gun. Simple game fault but very fun to watch. 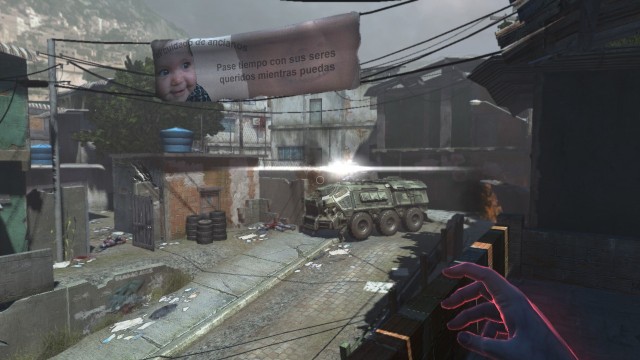 That’s cute, I wonder what it means. “Spend time with loved ones while you can.” Oh.

I thought F.E.A.R. 3 was decent. The game’s real plus was how quickly we could just get into games and start from where we ended. It only takes a second to get back into the game so you can play even when time is short. You can learn how to play it straight away, so you can start enjoying it right off the bat.

At the end of the day F.E.A.R 3 is good quality fun; the perfect remedy to all the serious style shooters that litter Steam. If more games understood that sometimes I want to crack open a can of something and turn some private military types into a new wall decoration using only the powers of my mind, then the world would be a better place. It’s good old fashioned fun reminding similar to the Timesplitters 3 style of Co-Op fun.

+Easy to join an online game

+Very quick to get the hang of

You’ll have fun playing this with a friend, but there’s still better out there.

If you’re looking for a co-op game that isn’t to taxing on a friendship you could do a hell of a lot worse than this.