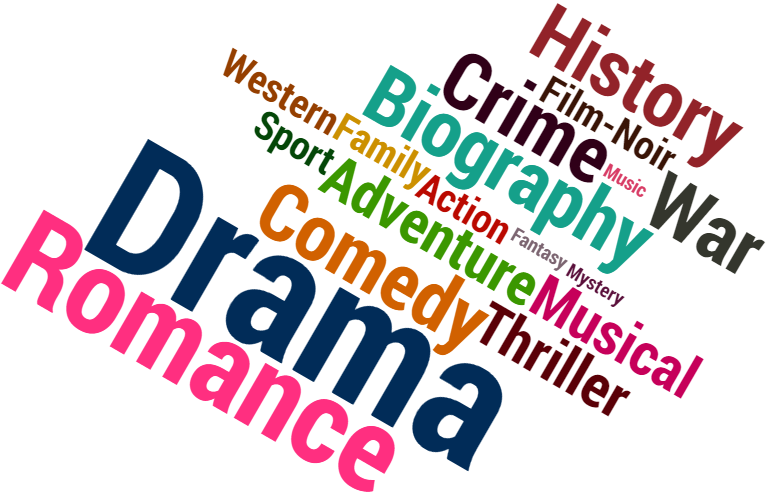 Trailing through IMDB recently, we stumbled upon a list of all Best Picture winning films from 1927 to 2015. This got us thinking ‘What could we do with all of this data?’. Here, we take an in-depth look into which genres are most successful at the Academy Awards. 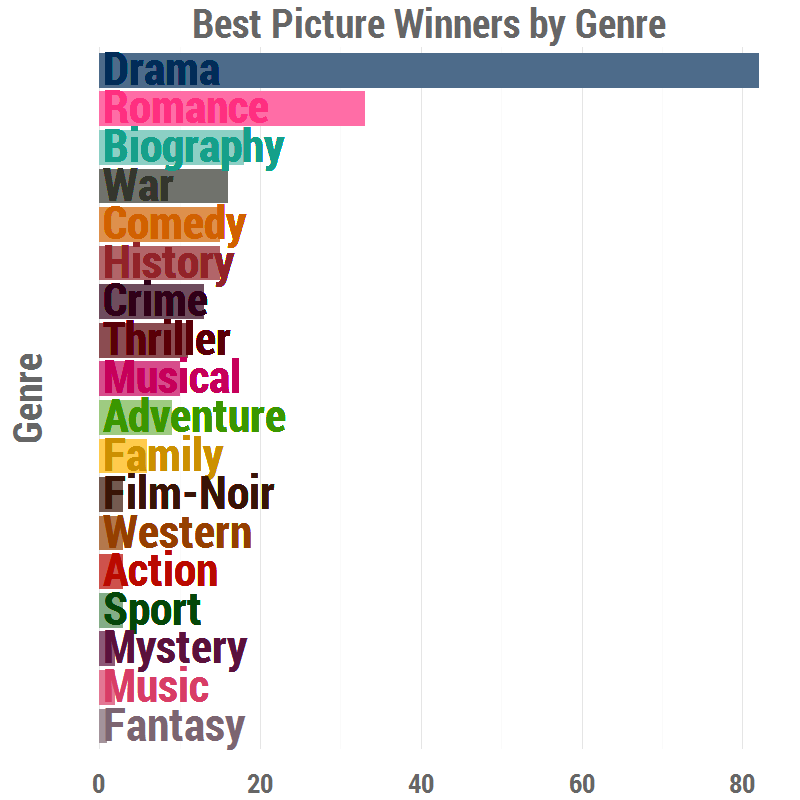 Here we can see that Drama is by far the most frequent genre of Best Picture winners, with more than double the entries of Romance films, the second most popular genre. However, Drama often seems like a ‘catch-all’ label, which is applied to many films in addition to other genre labels. Therefore, we need to look further into how Drama films are categorised. We can also see that the rarest genre for a Best Picture winner is Fantasy, with The Lord of Rings: The Return of the King (2003) as the sole representative for that category. Also rare are films labelled as Music, as the only two winners are Going My Way (1944) and Amadeus (1984). The distinction between Music and Musical, however, is not so clear, with Going My Way falling into both categories. There are notable genre absences among Best Picture winners, namely Sci-Fi and Horror. While no Sci-Fi feature has ever won Best Picture, two of the 2016 nominees, The Martian and Mad Max: Fury Road fell into this category. In terms of the absence of Horror, this appears to be more to do with IMDB’s genre classifications, as 1991’s The Silence of the Lambs is often credited as the first and only film to win the award. Although, whether this film should be classed as Horror or Thriller has long been a contentious debate.

Looking at whether the genre of Best Picture winners had changed notably over time, we split the data up into decades, from the 1920 to the 2010s. 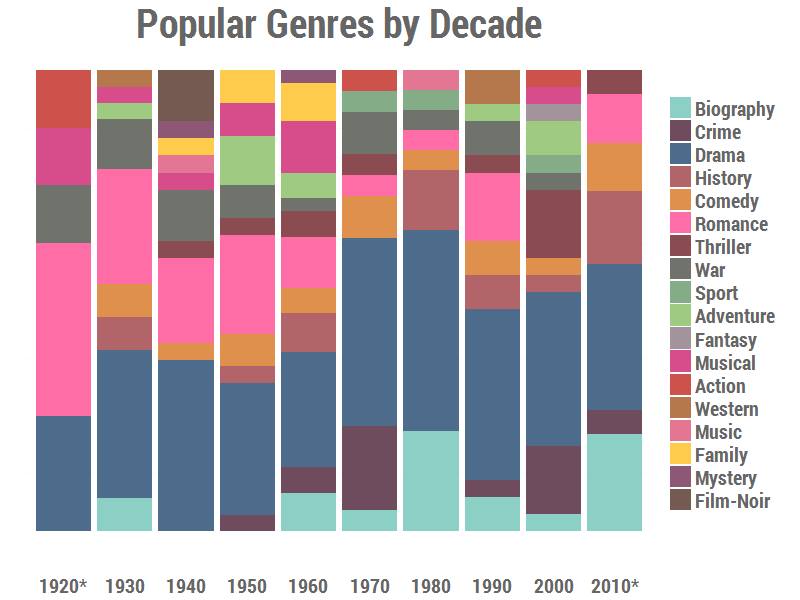 From this, we can see that Drama is a consistently popular genre across all ten decades. In fact, it is the most frequent genre of Best Picture winners in every decade apart from the 1920s, in which it is surpassed by Romance films. It is worth noting, however, that the first Academy Award ceremony was not held until 1927, and therefore there are only three Best Picture winners representing this decade. Another noteworthy point is that although many films are categorised as Drama, few are categorised as Drama alone (these include All About Eve (1950), One Flew Over the Cuckoo’s Nest (1975) and, most recently, Slumdog Millionaire (2008)). This again indicates that Drama may be a somewhat general or vague genre, into which many films are categorised alongside other genres.

The above visualisation does appear to show some trends in the genre of Best Picture winners over time. Firstly, we can see that Romance films were quite prominent from the 1920s-1950s, with fewer winners labelled as Romance films from that point onward. Although less prevalent in recent years, the 2000s are notable as the only decade not to contain a Best Picture winner categorised as a Romance film. Similarly, Musicals were quite frequent winners up until the 1970s, and only one Musical, Chicago (2002), has won in the years since. This may be set to change, however, with La La Land, starring Ryan Gosling and Emma Stone, tipped for Oscar success next season.

Only a handful of films placed in the Family genre have received the Best Picture accolade, and this was between the 1940s-1960s. While Family films are by no means restricted to animated features, perhaps the absence of this genre in more recent years can be explained by the introduction of a Best Animated Feature category in 2001.

Biography films have made up a larger percentage of Best Picture winners since the 1960s. This has been particularly noticeable in the past few years, as half of the Best Picture nominees for the 2015 Academy Awards were Biography films (Selma, The Theory of Everything, The Imitation Game and American Sniper), resulting in a plethora of articles condemning Biography films as ‘Oscar Bait’. And, with announcement after announcement of new biopics in production, the prevalence of the Biography film shows no sign of slowing down.

Some genres seem to be localised to certain decades. The clearest example of this is Film-Noir, which had its heyday in the 1940s, but there have been no Film-Noir winners since. Other genres are consistently present throughout the years, but are less prevalent. This is the case with both Comedy and War; there is at least one War film in each decade except the 2010s, and one or two Comedies in every decade since the 1930s.

Looking at genre diversity, the 1960s and the 2000s have the largest spread of genres. Although it appears that the 1920s is the least genre diverse decade, again, there is only data for three years of films in this decade. Interestingly, there is quite a diverse spread of genres in pretty much every decade, suggesting that Best Picture winners are becoming neither more nor less diverse in their subject matter.

Finally, we look to see which genres are most frequently paired together. 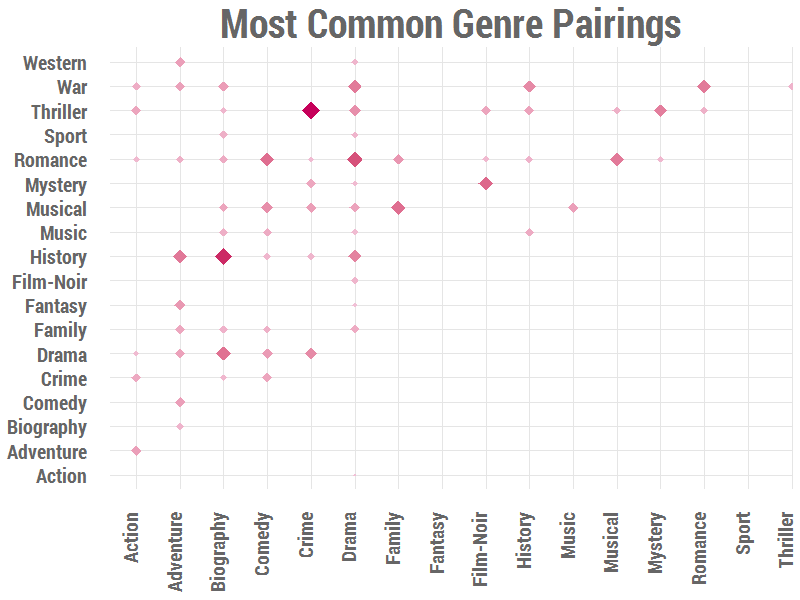 This illustrates that the most frequent genre pairing is Crime-Thriller. There are a total of 8 Best Picture winners which fall into this category, including In the Heat of the Night (1967), The French Connection (1971), and No Country for Old Men (2007). Other notable parings are History-Biography and Drama-Romance. We can also see which genres are less compatible with each other, at least in terms of Best Picture winners, despite how entertaining it would be for an Action-Musical or a Sport-Film-Noir feature to claim victory at next year’s Academy Awards ceremony.