Adapted from John Green’s novel of the same name, The Fault in Our Stars depicts the story of terminally ill Hazel Grace Lancaster (Shailene Woodley). Burdened physically by the heavy oxygen tank to which she owes her life, and plagued by the knowledge that her impending death will destroy her parents, Hazel comes to view herself as a ‘grenade’, and does her best to limit the damage she will inevitably cause. However, after reluctantly attending a cancer support meeting, Hazel meets a survivor of the disease in the form of charming amputee Augustus Waters (Ansel Elgort). What follows is a complicated, unconventional love story which sadly loses some of its originality by emulating too strongly the tropes of the generic, forgettable romance flick.

Firstly, the film is a very faithful adaptation of the source material. Despite frequently stating that he has no control over the movie, author John Green was often on set during filming, and, thanks to his online prevalence, his genuine excitement and approval of the film are captured in many of his YouTube videos. Much of the dialogue of The Fault in Our Stars is taken directly from Green’s novel; thus readers of the book are unlikely to be disappointed in terms of the screenplay. Inevitably, due to the existence of time, some scenes from the book do not appear in the film. A scene in which Hazel witnesses an argument between Augustus and his mother regrettably did not make it into the movie, despite its subtle and devastating hint to the story’s tragic climax. As ludicrous as it sounds, the film sometimes seemed a little too faithful to the book; including as much as possible in order to not disappoint existing fans or the author himself. For example, a scene involving Hazel’s homemade swing set seemed a little random and unresolved considering much of that storyline is omitted from the film. However, if viewers are unfamiliar with the source novel, this scene is unlikely to appear underdeveloped or out of place.

The focus of The Fault in Our Stars is the whirlwind romance between Hazel, a matter-of-fact, sarcastic teen, and Augustus, a grandiose, metaphor-spouting optimist. The pair’s differing outlooks on life do not stand in the way of their friendship; immediately portraying the protagonists as more intelligent and sensible than many adult characters in romance films. All too often a film’s running time is filled with two characters disagreeing until ten minutes before the end when they decide that they have mistaken their hate for love, and subsequently end up snogging and getting married. It seems important and symbolic that the film rejects such clichés. As terminally ill teenagers, Hazel and Augustus recognise the importance of time; they do not have time to waste on petty arguments and playing ‘hard to get’. This is a refreshing and clever way in which the film’s format and narrative structure reflect the nature of the characters. Despite the fairly unfamiliar fast-paced nature of the narrative, The Fault in Our Stars often borrows many elements of classic romance films. The moment the pair literally bump into each other for the first time is straight up embarrassing, whilst the much talked about kiss in the Anne Frank House scene was sickly and so badly executed that audiences may find it less heart-warming and more vomit-inducing. The presence of such clichés takes the audience out of the story as they depart from the ‘tell it like it is’ attitude of the remainder of Hazel’s narration. 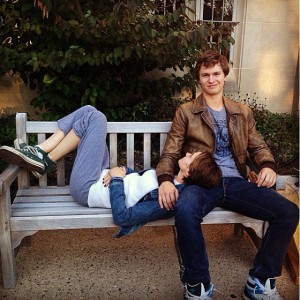 Although the film emphasises the love story between the main characters, another important plotline of The Fault in Our Stars is Hazel’s relationship with her parents. After hearing her mother cry that she ‘won’t be a mom anymore’, Hazel is haunted by the fear that her passing would ruin the lives of her parents. The fact that the protagonist’s mother and father are awarded so much screentime is unusual for a film aimed at a teenage audience, though it is refreshing and important to see healthy parent/child relationships on the big screen. Moreover, the unusual prominence of parents in a film about teenagers further adds realism, reflecting just how much more dependent Hazel is on her parents than other people her age. The struggle of looking after a teenager with cancer is portrayed brilliantly by both Laura Dern and Sam Trammell, though the former features more heavily. Dern successfully conveys the perpetual terror Hazel’s mother must face, rushing to her daughter assuming the worst even when Hazel is simply alerting her of an email. Some of the film’s most poignant scenes involve Hazel and her parents, making the story more well-rounded and believable. Other stories are explored, for example Willem Dafoe features as the drunken, Swedish hip-hop loving, author, exemplifying why one should never meet their heroes. One of the most disappointing transmissions from book to film however was the underuse of Hazel and Gus’ friend Issac (Nat Wolff), a fellow cancer sufferer who loses his sight. Isaac’s relationship with the main characters is much deeper than the film shows, and his scenes often seem tagged-on simply because he was too big of a character in to omit altogether.

While the cast as a whole gave good performances, Ansel Elgort’s portrayal of Augustus was particularly commendable. A pretentious and arrogant character, with a different actor Gus could have come across as flashy and unlikeable. Instead, Elgort was charming and funny without shying away from the more challenging and potentially irritating aspects of Augustus’ character. Fans of the novel will almost certainly be delighted with Elgort’s near perfect portrayal of Gus, though Woodley’s Hazel does not so closely match the character in Green’s much-loved book. Hazel is a character who is very witty, though this trait seems to be downplayed within Woodley’s performance. Perhaps the movie aimed for a slightly more serious tone, which would also explain why some other humorous, light-hearted elements did not make the cut. The film does still include a few comedic moments, though its focus seems clearly set on the romance elements and the gut-wrenching, weepy ending.

SUMMARY: A faithful adaptation of the best-selling young adult novel, The Fault in Our Stars should not be dismissed simply because it is aimed at teenagers. The performances are impressive all round, and, ignoring a few sickly clichés, the film is a fairly original, refreshingly honest, romance drama which tackles difficult subjects effectively.