A scary and enjoyable horror sequel … better than the first

The second installment of the Insidious franchise picks up where the first film left off. Revisiting the haunted Lambert family, the film deals with the aftermath of the family’s encounter with the dark spirit dimension known as The Further. Filled with nightmarish scenes and scary storytelling, Insidious: Chapter 2 does the rare thing and shapes up to outshine its predecessor.

The film begins in 1986 when little Josh Lambert is troubled by ghostly apparitions. Josh’s mother Lorraine calls for help in the form of medium Elsie Rainier. In a bid to find out what is bothering Josh, Elsie and her assistant Carl interview Josh on camera. After witnessing the evil ghosts haunting Josh, Elsie proceeds to make Josh forget his terrifying ordeal. This scene explains more about Josh’s past and why the family actually know Elsie (something which was not explained much in the previous film) whilst setting out the backbone of the film’s main story. Scenes from Josh and Lorraine’s past are intertwined with scenes from the present, making the film seem halfway between a sequel and a prequel. This is done effectively, thus giving the film a richer storyline than the first instalment. 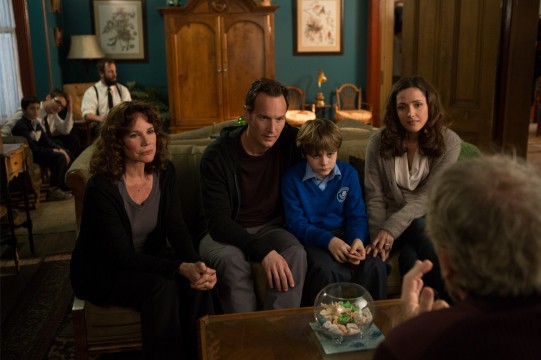 Back in the present, Renai and Josh (Rose Byrne and Patrick Wilson) and their children are still being haunted. The piano keeps playing by itself and babywalkers keep being thrown around (here though, it seems the ghost is doing the family a favour in trying to break what genuinely appears to be the world’s most annoying object). Although these are fairly mild occurrences, the film escalates quickly; within around 15 minutes there are ghosts here there and everywhere. Horror films ­- especially of the supernatural genre – tend to build tension slowly, but Insidious: Chapter 2 seemed to have forgotten about pacing. This had a very strange effect on the film and the whole thing felt very rushed. There was no time for character development and thus characters such as Renai seemed much weaker than in the first film, whilst the character of Josh, who had a huge character development storyline, didn’t seem to be featured enough in the film, despite being the main character. Furthermore, the fast pacing of the film continued throughout, until I was sat thinking ‘this cannot be the end’ when the credits started rolling. There was not enough terror, struggle or danger, and the plot seems to skip straight from the family finding information out and investigating to the dramatic conclusion. Without a real beginning or a substantial middle, the purpose of Insidious: Chapter 2 seems to provide the drama and the conclusion that was missing from the previous film.

Despite its more in-depth and explanatory nature, the film’s plot is far from flawless. The intertwining of past and present created effective character backstories, however, the whole time-travel spirit world dimension plot was a bit silly and nonsensical. With interwoven stories and time-travel spirit worlds to explain, the filmmakers appear to have assumed their film is more complicated than it actually is. This leads to amusing if somewhat patronising attempts at explaining the plot, particularly in the case of spirit man Carl (Steve Coulter) and his dice game which spells out (literally) the plot well after audiences have already worked out what is happening. This does let the film down slightly, though it does provide some unintentional laughs. On a similar note, there is a scene at the beginning of the film which just shows the last scene of the previous film. Whilst quite a useful recap for audiences, it still feels lazy and a tad amateur; like a ‘previously on Insidious’ feature which you find more often in TV shows. 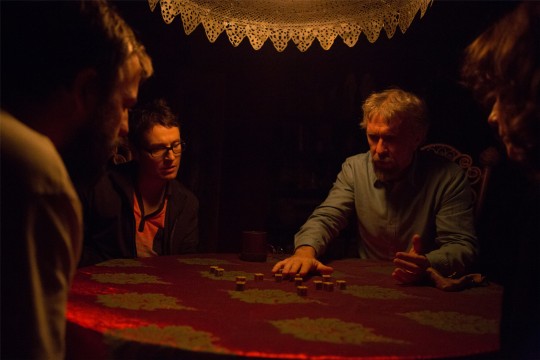 Though it may look like a game of Yahtzee, this is actually a séance

Unlike some horror franchises which favour portraying different characters in each film, such as the Paranormal Activity series, Insidious: Chapter 2 is strongly linked with the first film in the series. This by no means suggests that you must see the first in order to understand this film, nor does it mean that the sequel is any less enjoyable if you are not familiar with the original film. Although linked, this film feels very different from the previous one and perhaps a little more ‘mature’. Whilst the first film was all about the spirit world and mysterious demons, this film presents the story of Parker Crane; the frightening story of a child with an abusive mother who became a disturbed and terrifying killer. Insidious: Chapter 2 is slightly more grounded in real life terror, and the scenes involving the hospital and Parker Crane’s old house are particularly shocking. In addition to this, there was a welcome and refreshing decrease in the amount of ‘jumpscares’ featured, allowing more time for the exhibition of subtler, creepier scenes. The spirit searching duo Specs and Tucker (Leigh Whannell and Angus Sampson) return from the first film. Although at times they do provide a bit of comic relief, they are never exactly hilarious, and there are times when they are used inappropriately. At the climax of the film, dramatic scenes are accompanied by images of the hopeless, bungling antics of the duo. This creates a juxtaposition of horror and comedy; they sort of cancel each other out and thus the film’s climax falls a bit flat.

SUMMARY: Insidious: Chapter 2 is fast paced, scary entertainment. At times silly and with a few weak points, the creepy scenes and enjoyable, in-depth plot are enough to keep fans of the original film happy whilst attracting new fans to the franchise. If the previous film is anything to go by, the cliffhanger ending is sure to signify a third installment to the Insidious series, and until then we can only wonder what fate lies ahead for the haunted Lambert family.