This was the first release from Greenheart games, founded in July 2012 by siblings Patrick and Daniel Klug. New to the gaming scene they set out with purpose, they wanted to create fun games. Seems like that should be the minimum that you would be aiming for, but recently there has been a rising in mind numbing click-fest apps from money grabbing cooperation’s. That is a commendable reason to get on board in this industry however Game Dev Tycoon “falls a bit short”. (-All Games) 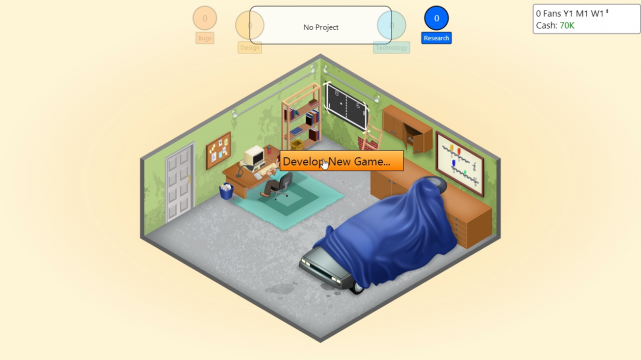 Started from the bottom…

I heard about this game for the first time in a different way to most. They made news for their tactics to battle online piracy by allowing modified versions of the game to be pirated making it unplayable. This isn’t new of course; we’ve seen it plenty of times before, from the sickening camera movement of Grand theft Auto to chicken guns and unbeatable scorpions seen in Crisis Warhead and Serious Sam. In short, the game is a business simulator where you sell games to make money, but if you pirated the game you yourself would find your in game company crippled by pirates, halting progression. This lead to hilariously ironic comments on torrent sites complaining about the amount of pirates in the game, delightful. For me, this was enough to make me want to buy the game.

The game starts out in the 80’s; you are a very competent programming looking to get involved in the gaming revolution. Working from your basement you create games, starting with text based ones for your trusty G64, they get reviewed and then the money comes rolling in, hopefully. If you continue to do well you can keep up with the curve, writing new games, making new engines and getting yourself into a new office, where you can hire new staff. Progressing through time you work hard to make the best games out there for the newest systems technology has to offer. By the end of the game, which is 30 years in game time or about 6 real hours, you’ll be developing consoles and making virtual reality games. 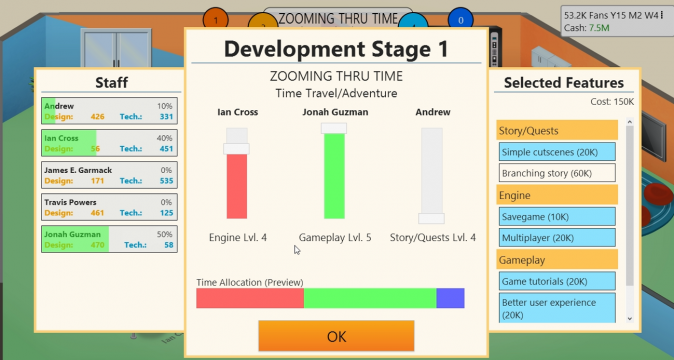 The most important part of this game is making your game. You start off with 50k to get you going: choose a name, choose a topic, choose a platform and choose an engine and you’re ready to get going. There are three development stages where you choose what to prioritise in your game, be it the engine, the sounds, the AI, it’s completely up to you. The game is split between Design and Technology, simulators may need more tech’ or a music game may need more design. As you work bubble come of you and go into either design or tech, however I’m still not really sure of their relevance other than them being an arbitrary measuring system. As you work you also get research points which you can spend on new engine components or new topics. If you have made a custom engine you can add additional features into your game at a price, once the game is done you sit tight and wait for the reviews. That first time, waiting for your first review, that’s the feeling this game is all about. Then either the big numbers roll in and you watch a smile roll across your lips or you fail, and you will crunch you your eyes and look at the reviews through your fingers. The success of your game determines how much money you’ll be or not be making. Careful though, too many bad games and you’ll find yourself need a loan, and then worse, bankrupt.

Although the review system holds the delight of the game, it can also be very frustrating. Yes, sometimes you understand the bad reviews when your idea is of a Werewolf Simulator called Teen Wolf Sims but sometimes it can feel a bit RNG, which is frustrating if you feel you’re on a winning formula. 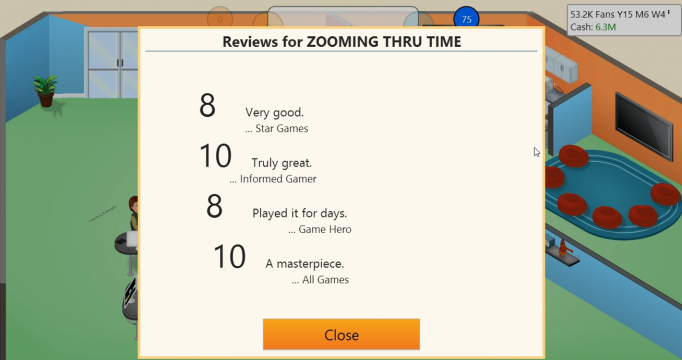 Graphically, you have a great game to look at. The offices are really cool, and you may even find yourself longing to work there. The graphic style allows the game to play very smooth; you’re not going to be looking at a table full of buttons that control different miniscule parts of the game, which gives it a very clean and fresh look. They also claim to have given the game a resolution boost as it entered steam, so it’s going to look good on the big screens.

On the most basic level, the sound track is okay. It portrays excitement and being in the business and gives the game a very upbeat feel, fitting in well with the graphical style of things. The track doesn’t loop very well, so occasionally you’ll be reminded that you’re listening to something, which isn’t good for a sound track. Soundtracks are there, and they’re powerful in themselves, but being reminded your listening to them because of a harsh transition isn’t good. On the plus side though, it doesn’t get that annoying, the sounds aren’t so harsh that you feel the need to mute the game.

I enjoyed playing this game a lot. I enjoyed thinking of a game idea, and then putting it through its paces and making it reality, because it becomes real to you, you start to think of mechanics and how the game would work and you’ll end up being sad that your game doesn’t exist. It’s one of those games where all that exists is you and the screen. Time goes by without you noticing and before long it’s three in the morning and you’re having to bargain with yourself “I’ll just release 1 more game then I’ll go to bed.” But there’s always one more last game. As much as you don’t want to stop playing it, you may still feel like you want a little bit more as you get stuck in a pattern of new game, new game, new game, research, research, new game engine, new game. All work and no play makes Jack a dull boy. I feel that there could be a few more elements to the game, competing against other companies or at least seeing games made by other people and their ratings because at times you can wonder what’s the point of even bothering, since you hear no news about other games or your rivals. 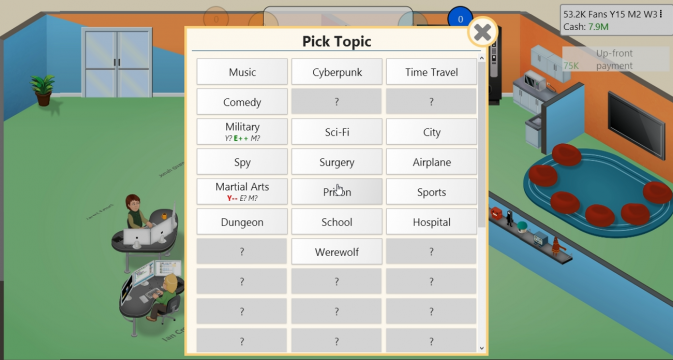 Another bug bare I have with the game is how you’re limited to your choice of genre. You can research more but when you go to do that you get a choice of three and you have to choose one. Who works like that?! If you want to research a specific topic, you the choice should be free, not between three random topics. 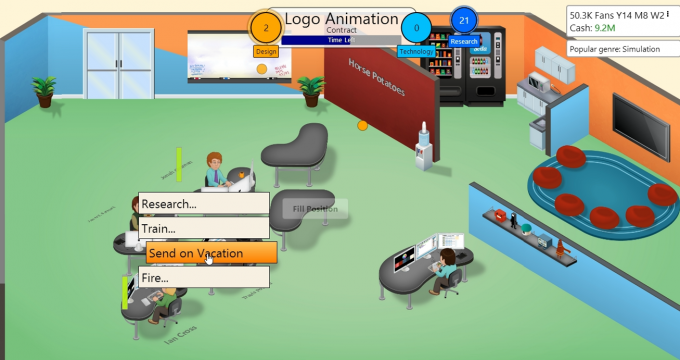 If you load Game Dev Tycoon, you probably won’t close it for a couple of hours  and you’ll be in a special third space that isn’t reality and isn’t in game, you’ll be in a little bubble where it is both real and a game and you’ll love it because that’s what gamers want really isn’t it? To play something special that’s specific to them, so you’ll love making that. However, you must be aware that this game creates quite a boring world when you get past the superficial, with just your company in the running. At £6.99 you’ll get your money’s worth and don’t even hesitate if you see it for less but be aware we