While browsing the Steam library, looking for something to while away the hours, my eyes drifted upon something; a small Steam ad with a picture of a town. “Oh, I thought. What’s this? A new city-builder set in the middle ages.”  After checking out the reviews, people seemed pretty happy with the game. Well, after spending a night in with Banished, I feel that the positive reviews have come from people who enjoy pain. 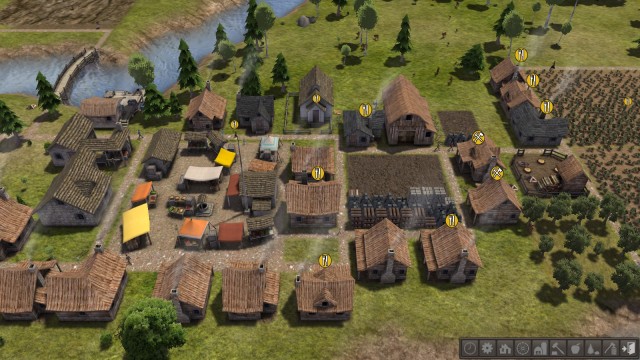 Banished is the debut game from Shining Rock Software and has been universally well received; which is great for any Indie company. What was is more is that Shining Rock Software is a one man band, Luke Hodorowicz. It’s a labour of love, and you can really see that a lot of effort has gone into this game and boy, did it pay off. Hodorowicz mentions that he may want to develop the game further, by adding mods and making it available on multiple platforms, so hopefully this game is going to be one to watch over the coming months.

Banished doesn’t have a story other than that you are a group of settlers, starting again. It’s a lot like the game Towns in that respect.  It is possible to jump right into the game, but you’ll probably want to get the tutorials done. The tutorials don’t tell you as much as you might like them to, but they’ll get you started. Moreover, Banished’s tutorial system feels quite old fashioned, bringing back memories of the horrible-to-navigate-tutorials of Rollercoaster Tycoon. The camera system is fairly standard, however, if you play a lot Civilization you may find it frustrating that you cannot just drag the screen to move the camera.

Okay, you’ve got the tutorials out of the way, now the fun begins! You will notice upon starting a new world that you get the option of entering a ‘seed’. A ‘seed’ is the map you’re going to be playing on; it is randomly generated and unique, meaning you can share your starting maps with anyone. There are also some interesting and pretty cool seeds available. 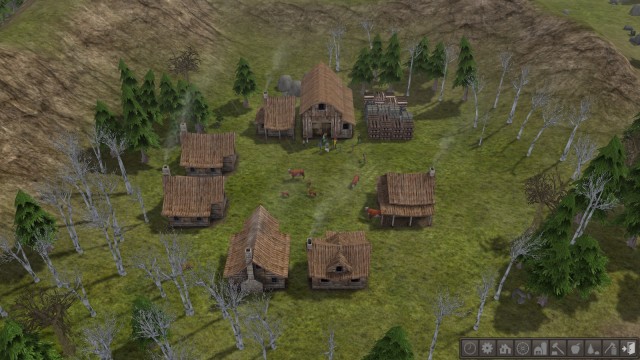 Everyone writes their own story when they form the beginnings of their humble settlement. I assume they could be glorious, liberating tales of success, but more likely, they’ll be tragedy. My plan for Banished was simple: Build houses for the people to live and farms to feed them. What could go wrong?

After some tranquility, pleasant construction and fruitful harvests, I thought I was made. Then it really began. Winter: “Steve the tailor has died of frostbite.”  Oh. Oh Steve, I hardly knew you. I stayed still for a second after the tragic loss of Steve, then I began to ponder, it must have been a fluke! I guess Steve just fell asleep in the river. Oh, that silly Steve. I said it began earlier, but I was sorely wrong. Before I knew it, whole families were eradicated; they could have been the start of history but instead they become part of tragedy. Some died of hunger, some of frostbite and some even managed to get crushed by rocks, but that totally wasn’t my fault! Honest. I sat there, mere hours after the dawn of my sure-to-be-prosperous nation, looking at five empty houses and a dilapidated farm.  The game didn’t tell me I had failed, though, it let me gaze upon my empty town and the three remaining, dishevelled, malnourished husks of my once glorious people, wandering around waiting for the certainty of death. It was at that moment that I became intrigued. 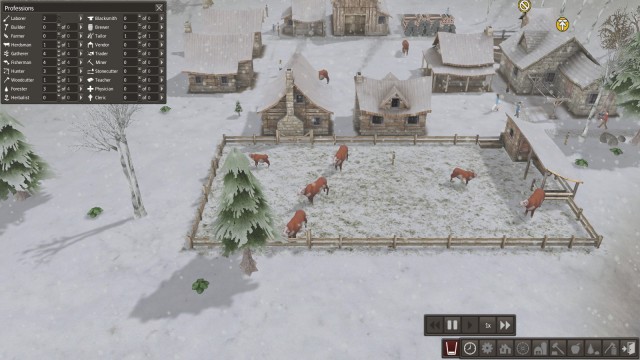 Banished is a game with difficulty and realism. A game whereby a bad winter that you were not ready for can destroy everything you have worked for; the game does not pull any punches in that respect. I went through four different new games trying to work out where I was going wrong.  Eventually, I stumbled across a basic formula that worked for me. I started, after housing everyone, with fish farms and hunting grounds to build up a stockpile of food. After that, I went for farms to keep a constant supply of food coming in. I then got a tailor and a blacksmith to fulfill the basic need of clothes and tools. You can get up work camps for each resource, which is labour intensive, or you can strip the landscape for quick collection, but scavenging the land lends to the risk of making it barren and scaring off the wildlife you need to slaughter. Then I had some tough decisions to make, how should I assign my men? When assigning your labour, this is a point where Banished may turn you into a monster. In the game, only adults can work, and children are just a strain on your economy. Very quickly you may get into the mind-set, that if people have to die, it might as well be the children.

I wanted the buildings up quickly, but I had to make sure the granaries did not run dry during the harsh winter. The town is small and my biggest limitation was workers. This meant I had to play it slow and steady. Taking risks would ensure that I would be slapped in the face for my foolish ambition, with 20 deaths on my hands, and this had already happened far too many times. This time I was cautious, and I made sure to not overextend, keeping a good supply of food and making my expansions when I could. That was the start of the mighty civilisation, the creatively named NewTown1.

The experience of playing Banished is aided by its wonderful graphics style; they are tranquil, calming and immersive. The graphics make you care for the labourers in your fields, and you mourn their deaths with their family. Watching the weather role over season to season as your little villager’s age is also rather fulfilling. Those first wisps of snow at the start of winter can be pleasing to the eye, but also instil fear in you. You can, almost, see the villagers pull there leather jerkins closer as they struggle home in the cold. Or, like Steve, you can feel their pain as they freeze to death, because the idiot in charge doesn’t know how to give them adequate clothing.  The sounds of the game are basic, but help immerse you into the scenario. Sadly, I had to turn some of the effects of as the animals in the pens drove me to breaking point with the repetitive mooing and suchlike, but overall the soundtrack is pleasant.  You might be left asking for a little more from the sound track, which although is fitting, it is also bland. 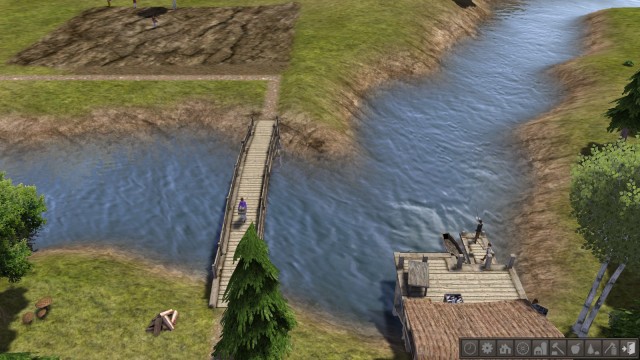 Banished is a very enjoyable time sink to poke your head into and you quickly get sucked in. The game is a lot like a Civilization game in the fact you can sit watching things develop whilst you are watching or reading something else while doing it… oh wait …THAT’S WHY STEVE DIED.  It’s the type of game where you can hook up a second screen and put on your favourite film as you wile away the hours expanding your town. If you like games like these, you will be playing this hour after hour after hour until it is 5 o’clock in the morning and you find yourself sat in the dark alone with just your laptop. You didn’t mean to, but you just can’t stop.

£15 may be slightly on the heavy side, but it will be well worth it if it has sucked you in in. Obviously, there is no time frame for completing the game, but I’d expect that if you play a lot of these games, you’ll rack up hundreds of hours pretty quickly, making the £15 price tag seem very reasonable.

+ Freedom to express yourself

–  Sounds are a tad repetitive

This Night In With is dedicated to Steve the Tailor, who sadly froze to death last night.