I’ve always found it hard to get into games. I get overwhelmed by everything there is to do. I know it’s stupid, and that it’s a good thing games have so much content now. I felt stupid playing Bioshock. I felt like I had to force myself to keep going. I looked up how long it took to beat the game and I counted down the hours. I enjoy the story and I love the setting, but somehow it still felt like chore to play. Some games are completely different. I just can’t stop playing them. Mornings turn into afternoons turn into nights. The later it gets, the more often I hear myself saying ‘just one more turn’. 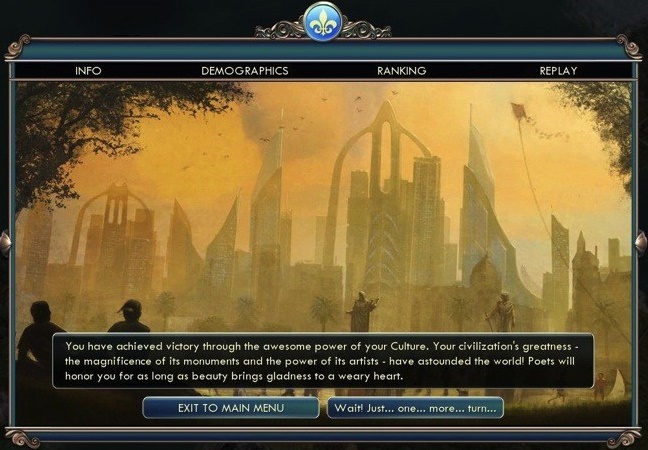 They knew what they were doing.

The first game I got this feeling was when playing Football Manager as a child. I was brought up in the north of England and forced into watching and playing football as soon as I was sentient. Although I have a lot of disdain for the culture surrounding the sport, I can’t deny that I’m passionate about the sport. I have a Steam account because of football. Specifically, because of Football Manager. I played it well before it was even on Steam, and I remember resenting the game for forcing  me to sign up for Steam. I didn’t know how much I’d be using Steam later. I wish I had known the permanence when I named my account over seven years ago. 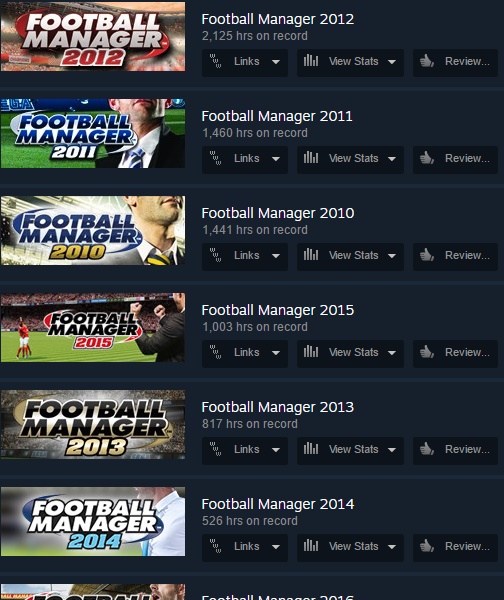 This was my first experience of the ‘just one more turn’ feeling. I’d play until the morning, closing my laptop and pretending to sleep when I heard footsteps. I couldn’t stop. Football manager has many different types of this ‘just one more turn’ feeling. Maybe it’s just one more match, you lost the last one, made a tactical change and you need to see if it worked before you stop. Maybe it’s one more day, you’re trying to sign a player and don’t want to stop until you’ve got your man. Now you’ve got him. Now you need to see him play. Now you need to see how his career pans out, and you tell yourself you’ll stop when he’s the club’s most capped player, but now it’s 2075 and you’re wondering if you’ll get to retire before you drop dead. Just one more game…

I may have resented Football manager forcing Steam upon me at the time, but it proved to move me from the console to PC. Then I started watching gaming videos, and I’d wish I had a Steam account as impressive and extensive as I’d see on YouTube. I dreamed of having a scroll wheel on my account one day. Think about it, so many games you’d actually have to scroll through to find what you want.

One of the first games I played after moving to PC was Civilisation V. I never felt overwhelmed by huge amount of content the game had to offer because it gave me a feeling I was very familiar with. I always wanted just one more turn. From the offset, you always want just one more turn. You’re building a scout and there’s 6 turns until it’s ready, so how can you sleep until it’s done?  In the meantime, what will your warrior find in the fog of war? There’s so much going on each turn that you need to keep playing to see it resolved.

Civilisation V actually makes reference to this feeling on the victory screen.You can choose to exit the game, or to keep playing for “just…one…more…turn.” I don’t recall ever just exiting. How can I leave what I’ve been building for so long? I must see the resolution of my glorious civilisation, see them conquer the flat earth. Or at least drop a nuke on my rivals before they destroy me after I coward my way to a culture victory.

By the time I’d left home and gone to university, my Steam account did have a scroll wheel. I owned much of Steam’s back catalogue through Humble Bundles and frugal gaming websites. At this point, I moved on to looking towards indie games. The ability to be niche and still be successful is the real advantage of the first world. Games about sending soup to other galaxies, talking russian dolls, babies that fire tears to defeat mega satan, and even a game about making games.

Game Dev Tycoon was the first game I played where I shared the ‘just one more turn’ feeling. After showing Jasmine the game one night, we thought we’d play for a while. It’s a very easy game to start playing, you just pick a genre and platform, name your game and you’re off. It doesn’t sound like the type of thing that you’ll play for long. But sure enough 3 AM rolled around, all the biscuits had gone and we’re wondering how to save the company. Why are we still pouring so much money into our failed Blueno console? Why are our staff so needy for holidays? But we can’t lose everything we’ve built, so we churn out just one more game.

The most recent game to evoke this feeling from me was Stardew Valley. But this time it felt a little different. I had read what the game was about, it sounded cool, so I bought it. I enjoyed the intro and named characters and gave my farm the cool name, “Lost Corner Farm”. I played about 20 minutes more before I began to feel overwhelmed so then I closed the game. I knew Jasmine would like it, though. So as soon as she was back I told her about it, and she thought the game was cool despite my stupidly named farm. After a rename was requested, I suggested that we just start a new game. Like it didn’t matter that she thought so little of my cute farm name.

Playing Stardew Valley together was a whole different story. We both enjoyed different parts of the game, and when we each focused on these different elements,  it began to seem a lot less overwhelming. Not long afterwards, we were hooked. I think we’ve owned the game little under a week. We’ve played 36 hours. I’ve never experienced a game with so much to do. Farm, explore, socialise, mine, fish, cook. Almost everyday is something new. Some days you want to fish but it’s somebody birthday and you need to get them a gift but you wake up and your crops are ready so you need just one more day to get your farm in order. But then tomorrow there’s a festival or Clint needs you to bring him an iron bar, even though he’s the town blacksmith. So, now you need to play another day to satisfy your ambitions, but you’ve played so long now it’s nearly the next season. Then you can plant the next season’s crops and get this season’s fish.

The just one more turn feeling is strong but playing together completely changes this feeling. Instead of being stuck, glued to the screen, not bothering to take care of your most basic needs, you can just hand over the controller, take care of yourself, and watch someone else play for a while.